When I tell people that I work for an advertising specialties company, the conversations almost always culminate in the same final question: what promotional products work the best?

It’s a good question. People want to know what they should buy when they need some custom imprinted swag. And I always respond with the same answer: it depends.

Everyone hates that answer, but it is honestly the truth.

The industry, brand image, recipient, purpose, setting, quantity, budget, and deadline all play equally important roles in determining the most effective promotional items. Naturally there are certain products that have a broader application than others, but that doesn’t necessarily mean those items are the most effective.

Most effective means most impactful. What promotional products will have the greatest impact? What will bring the audience to action (call, visit website, sign-up for newsletter, become a customer, etc.)? And what will make the most lasting impression?

For the following five brands, the most effective items may not be what you’d expect, and their clever executions demonstrate the incredible power of a well-planned promotional products campaign. 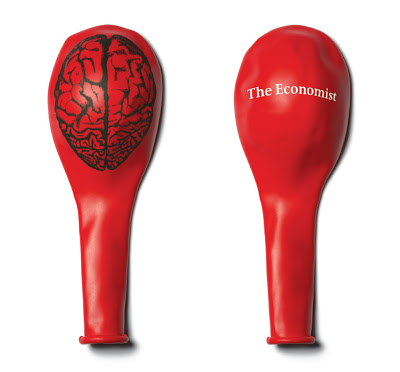 A latex balloon is literally one of the least expensive promotional items available, but that doesn’t mean it can’t also be the most effective. The Economist’s use of this balloon is nothing short of brilliant.

The obvious message The Economist sends with the balloon is that its subscribers will become smarter from reading the publication. But the balloon takes on a much deeper meaning when considering the magazine’s primary subject matter: economics.

Important and meaningful concepts such as economic bubble (also called a balloon) and inflation (get it? Haha) come to life through the use of this simple promotional product. By appealing to those who appreciate the ingenuity, The Economist attracts its ideal audience and communicates its identity as a deep-thinking publication.

Who knew a balloon could be so impactful? 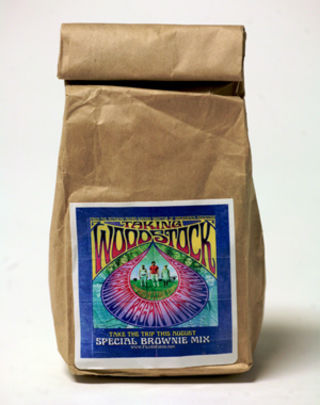 In an effort to bring attention to its theatrical release, Taking Woodstock mailed these brownie mix bags to movie critics and media companies. The comedy-drama film affixed a branded sticker to the bags and included a recipe that leaves room for a “special ingredient” (whatever that is…).

The off-color gift does a great job of grabbing attention and makes for a funny story that recipients can share with friends and colleagues. Best of all, the goofy promotional campaign gives a glimpse into the humor of Taking Woodstock and what to expect from the movie.

Also, keep in mind that a promotional product isn’t some sort of silver bullet, especially when it comes to the actual product or service. While the brownie bags successfully attracted viewers, they couldn’t do anything to help the film’s ratings. Due to its poor reviews, Taking Woodstock only grossed $9.9 million at the box office, not even coming close to its $30 million budget.

Maybe viewers were supposed to eat the brownies directly before seeing the movie?

What good is an article with illicit drug references if it leaves out alcohol? Well, luckily, Shiner Bock gives us some great material thanks to its witty use of promotional koozies.

When Heineken became the official beer sponsor of Austin City Limits, Shiner Bock, the local favorite, felt snubbed. So the indomitable brewery took matters into its own hands and crafted a sneaky scheme to weasel its way into the music festival.

As attendees entered the festival, Shiner Bock gave out thousands of these koozies for fans to use during the concert. So guess what beer appeared to be the sponsor in all of the Facebook selfies, YouTube videos, and Instragram photos? 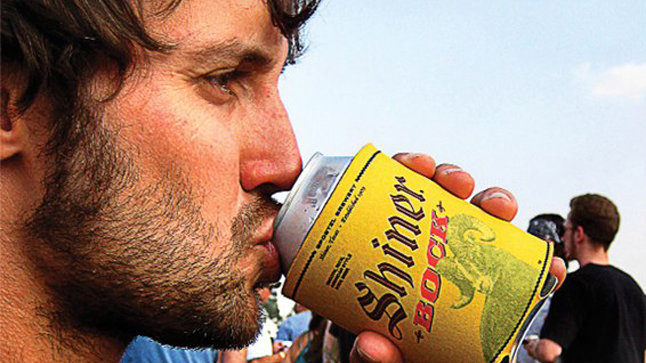 Shiner Bock not only garnered a ton of impressions and media coverage for its creative act of defiance, but the brand also successfully reinforced its surprisingly charming anti-establishment reputation.

This is a perfect illustration of how promotional products have the potential to reach audiences that are seemingly off-limits. It just takes some creativity and the right promotional item. 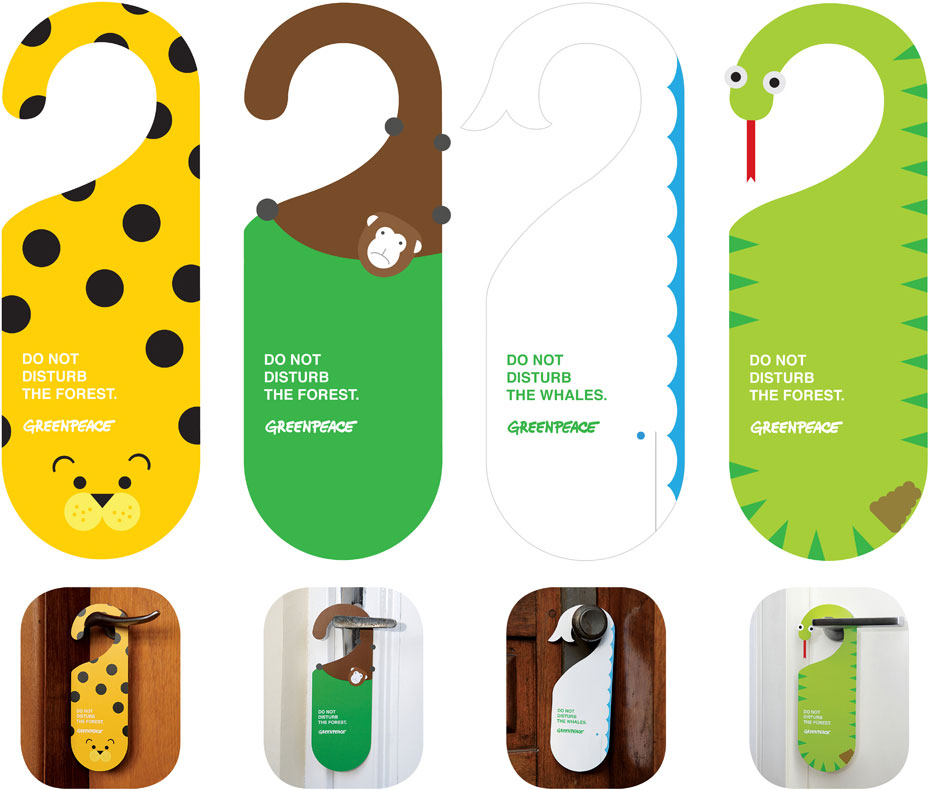 Part of the mission of many non-profits is to raise awareness of its cause; people don’t get involved until they understand that there is a problem. So to help spread awareness, Greenpeace made customized “Do Not Disturb” signs and placed them in on the door handles of residential buildings and hotels in Brazil.

Greenpeace uses the “Do Not Disturb” message and applies it to the causes the organization cares about most: deforestation, whale hunting, and sea pollution. But this clever campaign is more than just a cute a play on words, it is also an effort to impact implicit association.

In this case, the door sign is very effective because it gives new meaning to a common term and changes what people will think about when they encounter the phrase “Do Not Disturb.” Changing how people think is a powerful thing. Remember what Norman Vincent Peale said: “Change your thoughts and you change your world.” 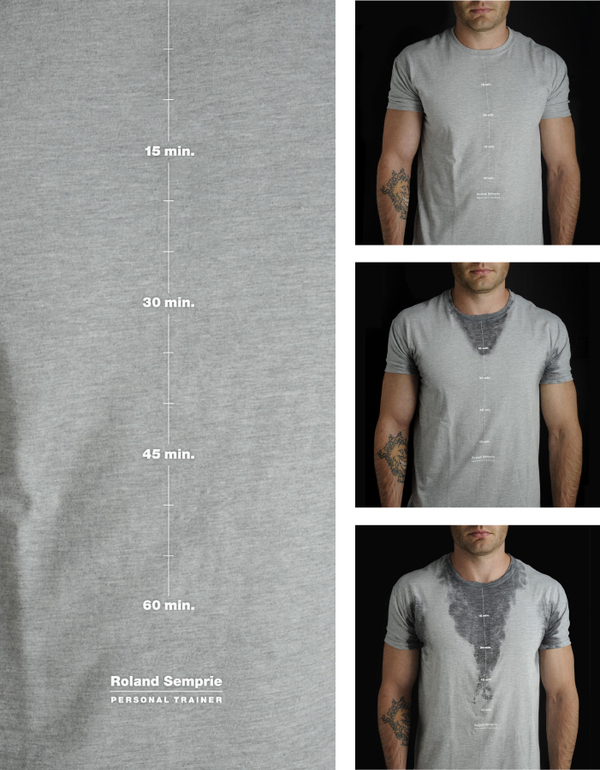 For Personal Trainer Roland Semprie, the best way to advertise his service is to show its efficacy. And nothing says, “I’ll make you sweat!” like this promotional t-shirt that he gives to clients to wear during workouts.

When clients leave a session, the t-shirt broadcasts the results of Roland’s training services to all of the passersby in the gym. As an added bonus, the t-shirt motivates current clients to push themselves harder, which of course only makes Roland’s services that much better (pretty smart, huh?).

Most brands reserve promotional products for potential clients, but Roland Semprie turns this paradigm on its head. He gives his t-shirts to current clients and they do the promotional work for him.

Such a novel idea!

Turning customers into advocates is an important strategy for every business, and sometimes it may take a creative promotional product to do the trick.

The One Thing You Need To Know About Promotional Items

Just like any other marketing tactic out there, the most effective promotional products are those that are incorporated into a creative and memorable advertising campaign. No single advertising specialty is the panacea that works in every circumstance.

Learn from the above five brands who thoughtfully used their promotional items to accomplish their marketing goals. It’s not so much what you use, it’s how you use it. A well-planned campaign brings the best results and makes promotional products even more fun. So get creative!

[notification type=”alert-info” close=”false” ]What are some effective promotional item campaigns you’ve done or experienced? Be sure to share it with us in the comments section below.[/notification]