But before discussing the cause of death, let’s take a moment of silence to pay our respects and reflect on the life that was taken from us too soon. Here are three beautiful statements made by industry leaders about inbound marketing’s short, yet highly acclaimed existence:

[Inbound marketing means] creat[ing] quality content that pulls people toward your company and product, where they naturally want to be. By publishing the right content in the right place at the right time, your marketing becomes relevant and helpful to your customers, not interruptive.

Inbound marketing earns the attention of customers and makes the company easy to be found. Traditional marketing tactics based on “renting” attention that others have built – and interrupting the buyer in the process – are becoming less and less effective.

Earning the attention of prospects and customers by creating relevant, helpful resources that they find on their own, without interruption marketing methods, sounds amazing. Too bad it’s no longer possible.

You may think what I’m saying is poppycock, but don’t eel slap me just yet; hear me out first.

There’s No Such Thing as “Earning Attention”

Inbound marketing died when search engines vanquished keyword stuffing once and for all. Keyword stuffing was the only true form of inbound marketing to ever exist. Out-stuff your competition and you’ll earn a higher rank in the SERPs where your customers and prospects can find you without any interruptive marketing. Simple as that.

But when search engines changed the rules of the game, ranking factors became more about building links than stuffing pages with keywords. And how do you generate links? By producing high quality content your audience finds valuable and worthy of sharing. And how do you get an audience? By promoting yourself and your content (how else are they going to find you and learn what you’re about?).

To draw attention to yourself and your content you email influencers, become a syndicated blogger, attract more Twitter followers for a larger audience, and drop a chunk of change on Facebook ads. All of this is outbound marketing.

The confusion comes when we notice the viral, hands free after effects.

No, you love referrals and viral marketing. Using your 1,000 followers to spread your content is nothing more than effectively leveraging your circle of influence on Twitter. You only had to advertise to 1,000 followers, and those who found the e-book valuable took it upon themselves to advertise to their own followers on your behalf. You are renting their audiences. Referrals and viral marketing are outsourced advertising, not inbound marketing. Advertising is still advertising regardless of the person doing it.

“Rented? Outsourced? I’m not paying them. They are promoting the e-book on their own volition.”

Of course you’re paying them. You pay them in the value of the e-book. There’s no formal contract, but the terms are implicit. “If you find my e-book valuable, there are a few compensation options: do business with me, subscribe to my newsletter, share the e-book with others, or do nothing.” It’s essentially a Pay What You Want transaction. And if what you offer is truly valuable, then you might find yourself on the better end of the deal (just ask Radiohead how their release of In Rainbows went).

Good luck with that.

“Okay, so inbound marketing requires some outreach. Big deal. The key is that when I promote my e-book on Twitter, my followers are seeking the information that I’m providing. I’m offering relevant, helpful content that isn’t interruptive.”

Really? Let’s talk about that.

It’s easy to fall into the trap of thinking, “Well, obviously my tweets were helpful and not interruptive, otherwise 10,000 people wouldn’t have downloaded the e-book!”

In reality, though, the majority of users who saw the tweet about the e-book couldn’t have cared less. If asked, they would have actually preferred that you hadn’t tweeted at all. Just another non-relevant tweet cluttering up users’ feeds, getting between them and the tweets they really want to see.

“But they chose to follow me and gave me permission to send them tweets. Some even followed me first, so really they asked me for permission to receive my tweets!”

All of that may be true, but it’s also true that not everything you tweet will be helpful and relevant to all of your followers. Just like every blog post you write won’t resonate with every subscriber. Or every video you produce won’t be interesting to every viewer.

Most fans chose to download Radiohead’s In Rainbows for free. What made the Pay What You Want model successful for Radiohead was the minority who placed a very high value on the new album and paid accordingly. Likewise, only a small portion of your followers found the tweet about the e-book valuable and “paid” with a retweet. Then, a small portion of your followers’ followers found the retweet valuable and “paid” with another retweet. And so on.

But for the majority of your audience (and your audience’s audience), the content you share won’t be valuable and will be considered an interruption.

“If most of what I share is an interruption, then why do I still have followers, subscribers, friends, circles, etc.? Explain that.”

Put simply: the benefits outweigh the costs. Blog subscribers are willing to sift through the majority of posts that aren’t valuable for the handful of articles that they find highly valuable. Followers are willing to deal with the tweets of your latest meals and opposing political views in exchange for the e-book you include in a tweet that provides them with a ton of value.

But make no mistake; your fans will jump ship once they decide that the majority of what you share is an interruption and not a resource. It doesn’t matter that they “invited” or “permitted” the content: fans will unsubscribe from your email newsletter, unfriend you on Facebook, stop listening to your podcast, etc.

So does that mean that these fans also unsubscribed from ALL email newsletters, unfriended EVERYONE on Facebook, and stopped listening to ALL podcasts?

Of course not. Well, at least not yet, haha. If enough organizations botch email newsletters, Facebook, and podcasts, then eventually no one will ever sign up for them. This is exactly what happened with TV commercials, radio ads, and Internet banner ads. It’s why we have Netflix, DVR, TiVo, SiriusXM Radio, and AdBlock Plus. Marketers have flooded certain channels with way more bad than good, and, consequently, these channels have been dubbed “interruptive.”

Here’s a nice infographic from Rand Fishkin of Moz that categorizes marketing channels into interruption or inbound: 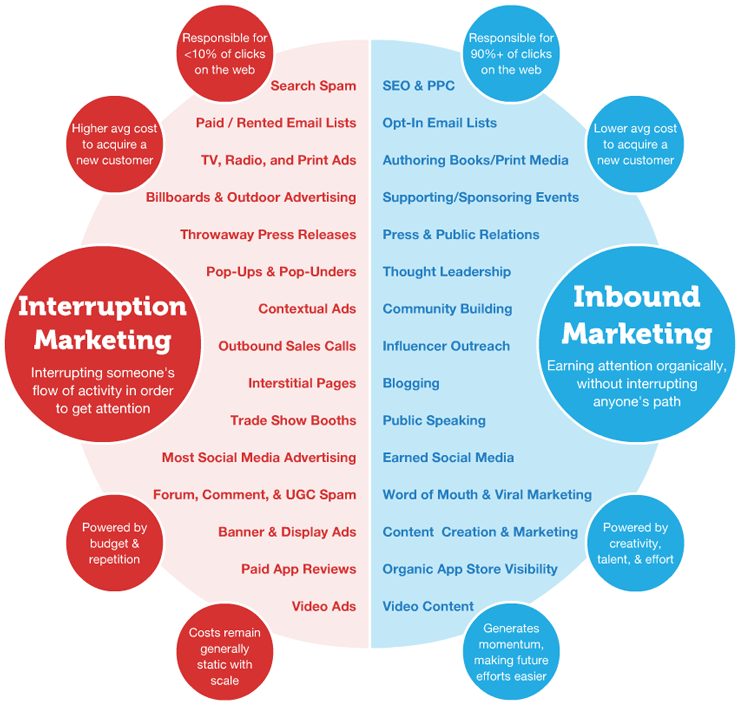 The problem is that the infographic is wrong. The whole stinkin’ thing.

“But TV commercials interrupt my show. How is that not interruptive?”

The connotation of the term “interruptive” is that the marketing is irrelevant and unhelpful (see HubSpot’s definition above). So what do you call a commercial that interrupts a TV show AND is relevant and helpful?

Let’s pretend you’ve been on the fence about buying new furniture and while watching TV you see a commercial offering an amazing deal. You’d be happy you caught the commercial. In fact, you wouldn’t even think of the commercial as an interruption; it’d be helpful and relevant. This happens all the time. Here’s a really fun example:

I remember seeing the commercial for this crazy deal. Even though I wasn’t in the market for buying furniture, I still thought the commercial was really entertaining and intriguing. The truth, though, is that the vast majority of ads aren’t entertaining, or intriguing, or funny, or valuable, and that’s exactly why certain channels get filed under interruption marketing.

Easy. Super Bowl commercials are usually way more entertaining, intriguing, funny, and valuable than other television commercials. It has infinitely more to do with the execution than the marketing channel.

Execution is why the locally-run Super Bowl ad of Savannah, GA personal injury lawyer Jamie Casino can get an extra 5 million views on YouTube, coverage in countless news stories, and tons of backlinks to his website. Must not be all that disruptive, huh?

Here’s the thing. You may watch this commercial and think, “I wouldn’t want to see that during my favorite show,” and that’d be fine. The point is that interruptive is in the eye of the beholder.

Rand lists “influencer outreach” as inbound marketing. Do you honestly think emails, phone calls, direct messages, etc. introducing yourself/your content to influencers aren’t interruptive? Imagine being knee-deep in a project when you see three emails from people you’ve never met asking you to give them some of your time and attention. Doesn’t that sound like an interruption?

“Well, if you are offering them something useful and relevant, then the influencers would find the outreach beneficial.”

So you’re saying it comes down to the execution rather than the channel, right?

Great marketers can offer value through every channel. Ever been on a road trip and made dinner plans the moment you saw a billboard for a restaurant you love? Ever been at a trade show and made a great business contact because of an amazing trade show booth? Ever receive a door-hanger menu for a local Chinese restaurant and discovered your new favorite take-out?

“Why Should I Care?”

The major goal of this post isn’t to challenge marketing terminology (although that is a byproduct). The major goal is to call marketers to perform at a higher level. Don’t settle for easy and boring. The reason so many people want to tune out marketing is because most of it is terrible. If marketers started treating every marketing opportunity like a Super Bowl commercial, then I honestly believe there’d be fewer people calling marketing channels interruptive.

Choose the marketing channels that will give you the best reach and engagement for your particular audience. Then draft marketing content that will knock their socks off.