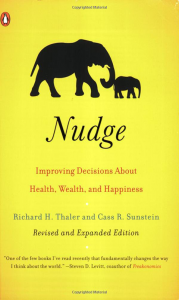 Dan Ariely’s popular book, Predictably Irrational, as well as Richard Thaler & Cass Sunstein’s Nudge are a pair of books that opened the eyes of many to the world of nudging. By leveraging behavioral economics and choice architecture, we are able to use subtle ‘nudges’ to influence the decisions people make.

If you are unfamiliar with the term nudge, it is a subtle push that aims to alter a person’s behavior without really being noticed. Instead of forbidding choices, or using overt incentives, a nudge acts more like a light breeze that our mind catches like a sail, pushing us into a preferred direction. Thaler and Sunstein’s Nudge: Improving Decisions about Health, Wealth & Happiness defines a nudge as such:

A nudge, as we will use the term, is any aspect of the choice architecture that alters people’s behavior in a predictable way without forbidding any options or significantly changing their economic incentives. To count as a mere nudge, the intervention must be easy and cheap to avoid.

People have likely been nudging behavior throughout all of history, but the formal study of the principles and reasons why we act the way we do is fairly recent. Here are 7 great examples of applied choice architecture. The great thing about a good nudge is that a lot of concepts can be applied across the board. If you’re looking for ways to improve your business, experimenting with some of these nudges is easy and cheap!

The urinal fly nudge is a well known mind hack that originated at the Amsterdam airport, but can now be seen in urinals all over the globe. By having images of flies etched near the drains of the bathroom urinals, spillage on the bathroom floor was reduced by 80%!

This is a great example of a nudge that is rarely consciously processed, yet taps into a quirk in most male behavior; we like to aim at things.

How about grocery shopping?

Grocery stores are overflowing with nudges and other attempts to influence our shopping decisions. These next examples are from different experiments conducted by researchers at New Mexico State University. In a way, these nudges are intended to dispel the effects of everything else pushing, pulling, and poking you to buy this or that at a grocery store. From the small impulse ‘purchase bait’ placed in check-out aisles to the tactical grouping of ingredients, the team at NMSU is seeking to nudge us in an opposite direction from our typical, less healthy shopping habits.

One of the researchers, Colin Payne puts it best:

The more mindless you are when you shop, the more you are going to be poked and prodded to buy the manufacturer’s products. We’re trying to give consumers the same power the companies have.

The first nudge came in the form of a piece of duct tape stretched across shoppers’ grocery carts. After sectioning the grocery cart, shoppers were also shown a flyer that instructed them to put fruits & vegetables in front of the tape, and everything else behind the line. The result? A 102% increase in purchases of fruits & veggies.

The second nudge implemented a series of large green arrows on the floor, making a trail to the produce section. According to produce director of grocery chain Pay and Save, Tim Taylor, when arriving at the decision point to go left or right, shoppers followed the green arrows 9 out of 10 times.

In retail, the customer tends to go to the right, but I watched when the arrows were down, pointing left, and that’s where people went: left, 9 out of 10. 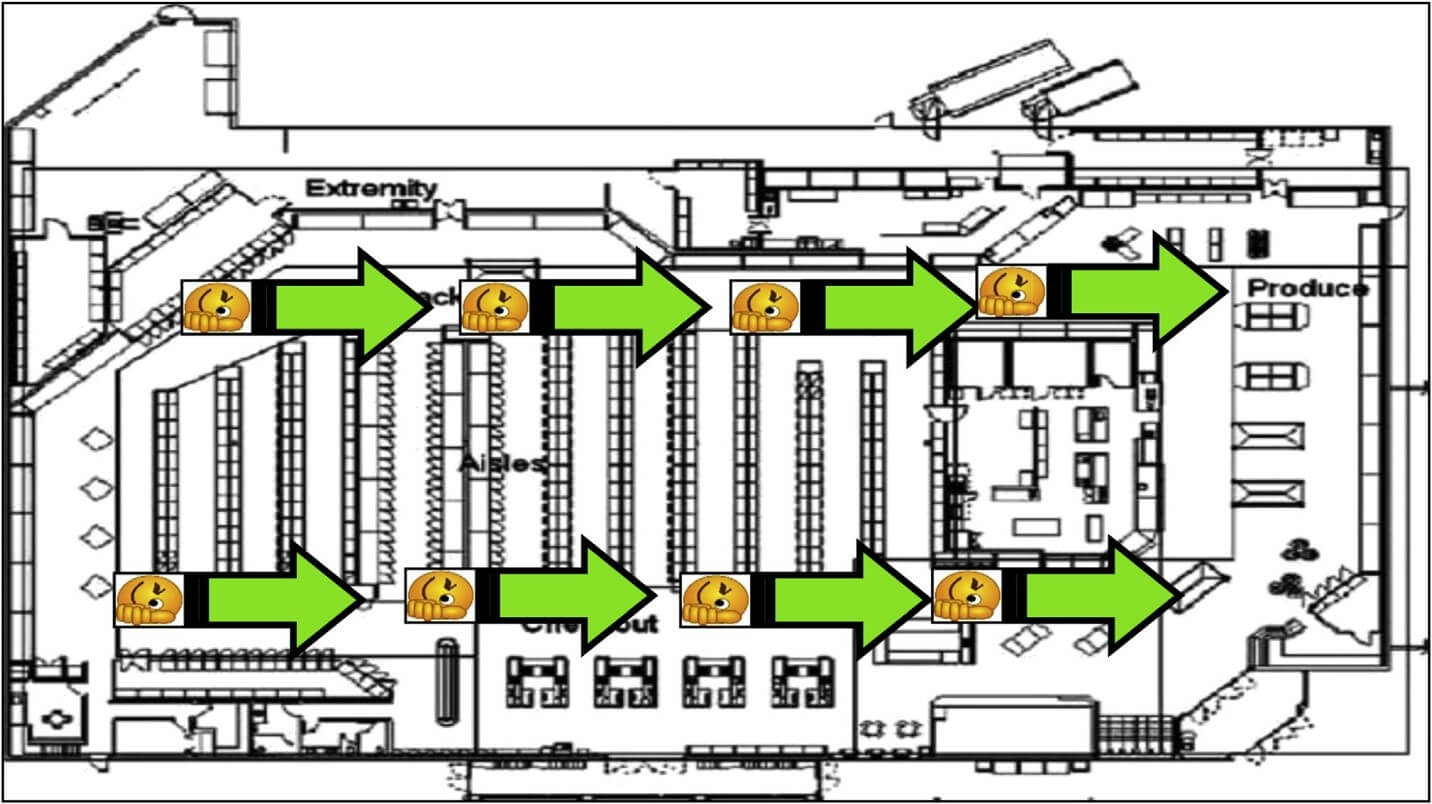 Example of arrow deployment in a grocery store.

The final nudge is still in the research process, but, if the hunch turns out true, could serve as an ultimate awareness nudge. This nudge tugs shoppers out of the overloaded marketing circuitry of a grocery store and hopefully back in control by simply placing a mirror at the end of shopping carts. Serving as a constant self-reminder, this grocery store nudge aims to keep shoppers constantly aware of their health when making purchasing decisions, as opposed to running on autopilot, which, as we all know, leaves us at the mercy of very clever merchandisers.

The outrageous $666 Douche Burger is exactly what it sounds like: a $666 hamburger.

Food Truck owner, Franz Aliquo, bluntly describes it as a, “a f—ing burger filled and topped with rich people s–t.”

Besides the superfluous ingredients, the burger is wrapped with three $100 bills. While it is an amusing tongue-in-cheek menu item, and a clever bit of marketing, the Douche Burger is serves as an extreme example of a common nudging tactic that a lot of restaurants employ.

Including high-priced items on the menu boosts revenue because it increases sales of the second most expensive item. As noted in Predictably Irrational, restaurants sometimes take advantage of what is known as the decoy effect even further by engineering higher profit margins on the next priciest dish.

In the case of the $666 Douche Burger, it probably isn’t going to work as a decoy (because the price is so far from the anchor prices for a hamburger), but it is a humorous example. Next time a menu price sticks out from the rest, you can only wonder if it is a nudge meant to encourage you to order the 2nd most expensive item.

Health and Wellness is one of the most popular applications of Choice Architecture and Behavioral Economics. In one study a research team tried to nudge the staff at Massachusetts General Hospital to avoid less healthy choices in the Hospital cafeteria. They used a 3 light system, red, yellow, and green, labeling unhealthy options such as Pizza and soft drinks with the red light, and salads or vegetables with green lights. 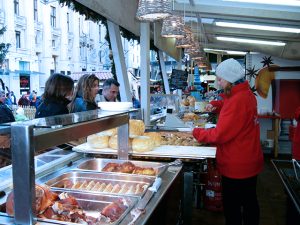 In addition, they positioned healthier options at eye level, and red light choices on lower shelves, as well as other clever positioning tactics to increase effectiveness. The numbers tell the tale.

2 years after implementing these changes, red beverage purchases were down by an encouraging total of 39%!

5. The Dollar a day program

The Dollar a day program is an ambitious program established in Greensboro, North Carolina in 1990, with other cities experimenting with the program since. The program aims to decrease the rate of teenage births by focusing on decreasing the rate of further pregnancies in teenage mothers (in 2011, 18% of all teen births were subsequent births). 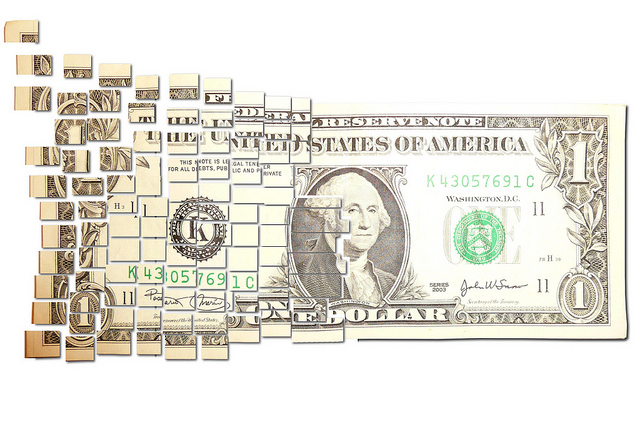 The program uses a very basic incentive as a nudge; rewarding teenage mothers with a dollar for each day they are not pregnant.

Because the payment is recurring, it serves as constant encouragement for young mothers to take necessary steps to avoid another pregnancy, while also posing the potential to decrease taxpayer spending (the state spent $392 million on teen childbirths in 2008). The state’s peak birth rate in teens is down 55% from what its high in 1991, and part of that is significant decrease can be credited to a program based off of nudging behavior.

The line “Plink Plink Fizz” was written at the bidding of a psychologist who suggested that, if you could create a social norm around using two Alka Seltzer tablets at a time, sales would double.

Through just a few words, dropping a pair of Alka Seltzers into a glass of water is all we need to think of when we are feeling under the weather. Who needs to read the label? Why would anyone think of using just one? Nobody who watches TV.

Even if you are put off by the goal of this nudge mainly being to increase sales, you can’t help but admire the ingenuity behind it.

In a parallel to McDonald’s former policy of asking, “would you like to supersize that?,” a study invited customers at a Chinese fast food restaurant to downsize their meal portions. The experiment showed that between 14% and 33% were willing to take the downsize offer; sometimes even without a discount offered. Though they downsized their portions, the amount of uneaten food remained the same, meaning that there was over a 200 calorie reduction in food eaten!

Imagine if the attempt to encourage smaller meal portions was more direct. "Excuse me, sir, I don’t think that eating this much food in one sitting is a good idea. Maybe you should eat less." Can that be a segment on Impractical Jokers? I’d like to see how catastrophic those results are.

Instead, by merely asking if they wanted to downsize, customers were both made aware of the existence of the option, and more likely to take a moment to rethink it.

From a business perspective, nudges like this wield the potential to improve margins and other operational costs in addition to encouraging healthier eating habits (because details aside, eating an excessive pile of anything isn’t a good idea).

Heck, as someone who indulges in Chinese buffets far too often, I know that I’d probably suffer less from food comas simply if the buffet used smaller plates.

[notification type=”alert-info” close=”false”]Nudges are not only interesting and provide insight to how the human mind works, these examples can easily be applied to businesses of all kinds. Even if you’re not a marketer, familiarity with nudging is a great tool to help make better informed decisions.

What are some examples of nudges that you’ve seen? Have you implemented any in your organization? Let us know in the comments, and remember to follow us on Twitter and sign-up for our e-mail newsletter for more insights on promotion and marketing![/notification]

Commonly mistaken for the office ghost in the USImprints office, James loves entrepreneurship, marketing, and tech, but not writing about himself in the 3rd person. Follow him on Google+ or Twitter